If you thought lighthouses were a uniquely East Coast thing, you haven’t explored the many picturesque lighthouses on Washington State’s coastline. From larger than life beacons reaching over 100 feet tall to lighthouses that predate Washington’s statehood, there are plenty of beautiful locations just waiting to be discovered. Here are a few of our favorites:

On the Eastern side of San Juan Island lies the Lime Kiln Lighthouse, an active navigational aid that guides ships through the Haro Strait. This quaint lighthouse is perched upon a rocky cliff and has a charming keeper’s house, making it a photographer’s dream. The brick-red roofing, paired with the green undertones and white walls, makes for a colorful lighthouse that will pop against the blue of the ocean. While you cannot enter the lighthouse on your own, the Friends of Lime Kiln Society offers tours during the summertime. 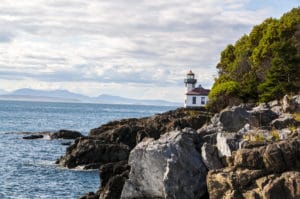 Point No Point Lighthouse is the oldest lighthouse on Puget Sound and rests on the western side of Hansville in Kitsap County. The structure was completed in 1880, 9 years before Washington was even recognized as a state! Given its age, the lighthouse is in impeccably great condition, boasting pearly white walls and a beautiful ruby red roof on the keeper’s house. The US Lighthouse Society is based right next door and takes great pride in the restoration of its lighthouses and their commitment to this one is obvious. You can visit the lighthouse anytime, or tour the inside during the summer months. 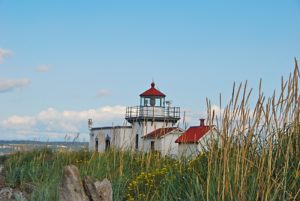 Out on the end of a serene sandspit near Sequim lies the New Dungeness Light Station. While this Olympic Peninsula tower is one of the only stations open for public tours 365 days a year, it is often overlooked as you cannot simply drive to the structure. To reach the end of the Dungeness Spit, where the lighthouse resides, you must get there by boat, or by completing the 5-mile (each way) hike which can only be accomplished during low tide. Since this lighthouse is located inside the Dungeness National Wildlife Refuge, it’s a great place to spot sea lions, bald eagles, and crabs that frequent the area. The colorful red, white, and green lighthouse at the end of the hike is well worth your travels as the lack of obstructions makes for incredible panoramic photos. After your long hike, take a well-deserved break at the Greenhouse Inn by the Bay where you can relax and watch the sunset dip over the spit that you just traversed. 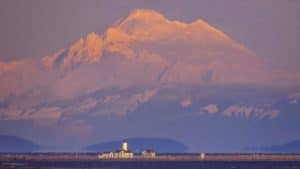 Just north of Seattle, before you reach Everett, is the small city of Mukilteo, where thousands of people from around the country, fly, drive, and boat in for the annual Mukilteo Lighthouse Festival. On the waterfront, adjacent to the ferry landing, lies the Mukilteo Lighthouse Park where this beacon stands. This picturesque lighthouse has been the backdrop of many weddings and once you see it in person, you’ll understand why. The sheer beauty of this lighthouse paired with the ferries gliding along the bay is stunning. Our favorite shot of the lighthouse is from a unique angle, taken from the ferry departing this sweet little town. 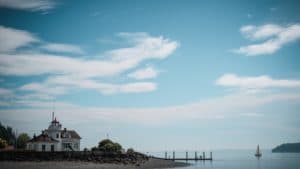 Cape Disappointment, just outside the town of Ilwaco, is a great stop for lighthouse hunters as it boasts two unique structures you can visit in one trip. The Cape Disappointment Lighthouse is the southernmost lighthouse in Washington and overlooks the mouth of the Columbia River. This black and white striped tower was erected in 1856 and can be reached with a short hike from the Fort Canby parking lot. The harsh environment of the mouth of the Columbia River and unforgiving storms have eroded some of the exteriors of the lighthouse giving it the perfect weathered look you expect of an old lighthouse. Just a couple miles north of the Cape Disappointment Lighthouse lies the North Head Lighthouse that was built in 1898 and was recently refurbished to its former beauty. From the top of the beacon, you can watch the crashing waves below that have claimed over 2,000 ships and hundreds of lives. While you are exploring the lighthouses of the Pacific Coast, plan a visit to the Boreas Bed & Breakfast Inn in Long Beach just 10 minutes away from Cape Disappointment State Park. 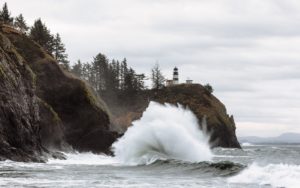 Patos Island Lighthouse is the most northwestern lighthouse in the United States as it lies on the northern end of Patos Island, a small uninhabited island in the San Juan Islands. In addition to taking a ferry ride to the San Juan Islands, you’ll have to privately boat in from Orcas Island, and may or may not be able to dock on the rocky shore depending on weather conditions. However, if you make it to Alden Point by boat, you can still see the beautiful secret lighthouse of the San Juans. From the eastern side of the lighthouse, you can see Mt. Baker on a sunny day, which makes for an incredible photo opportunity. 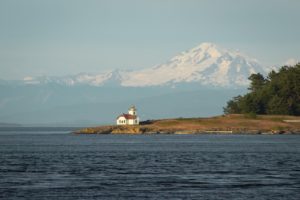 Grays Harbor Lighthouse just outside of Aberdeen is Washington’s tallest on the Pacific Coast reaching 107 feet tall. This lighthouse is still in operation and holds the original clamshell-shaped Fresnel lens that was built in Paris in 1895. For just $5 you can climb the 135 steps to the top of the lighthouse for unparalleled views of the ocean and the seaside town of Westport. The lighthouse is open February-November on variable days and hours. You can find their schedule and read more about it on the Westport Beach Historical Society’s website. 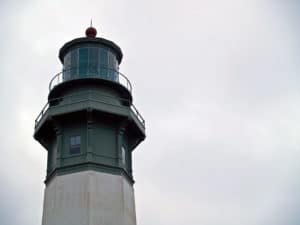 Discovery Park, one of Seattle’s most visited public areas, is home to the West Point Lighthouse, a victorian-era beacon that stands out amongst the other lighthouses in the Northwest. While most lighthouses are tall silhouettes with a small keeper’s house at the base, the West Point Lighthouse is shorter with a more developed keeper’s house. On a clear day, the mountains on the Olympic Peninsula can be seen from this point just beyond Bainbridge Island. All across the beach, you will find large pieces of driftwood that make the perfect foreground to this colorful lighthouse. 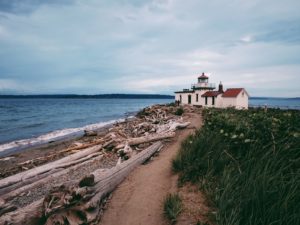 Plan a trip to each of these beautiful lighthouses and remember to take photos of each one. The best part about these classic structures is that they are picture perfect on any sunny day, rainy afternoon, or starry night. Gather up all of your photos and make your own coffee table book to remember your Washington lighthouse adventures.

Discover all of Washington State’s most beautiful lighthouses and let Washington INNSiders help you pick out the perfect B&B, inn, or hotel for your getaway!